Emmitt Smith is the NFL's all-time leading rusher amassing 18,355 yards over 14 NFL seasons. He's the only rushing back to win a Super Bowl, the NFL MVP Award, the NFL Rushing Crown, and the Super Bowl MVP Award all in a single season (1993). The former Florida Gator set dozens of school and NCAA records before moving on to the NFL, where he earned eight trips to the Pro Bowl and three Super Bowl Championship rings playing for the Dallas Cowboys. Smith retired in 2006, but it wasn't long before he was back in the spotlight; he and partner Cheryl Burke won the Season 3 championship of ABC's "Dancing with the Stars."  Since retiring from the NFL, Smith has brought his winning formula to a growing number of diverse business enterprises. Currently, he is the majority partner and co-chairman of ESmith Legacy, Inc., a Dallas-based commercial real estate company founded to focus and deliver real estate solutions and services for both general and minority market development. He is also co-chairman of the Emerging Business Action Team as part of the North Texas Super Bowl XLV Host Committee. This committee aims to get female and minority business owners certified and eligible for the Super Bowl-related contracts that will be up for bid. Smith is well known for his work with numerous community and charitable causes including: The Foundation for Excellence in Education (Take Stock in Children), Pat and Emmitt Smith Charities, President's Council on Physical Fitness, All Stars Helping Kids, The Family Place (Family Domestic Violence), Clay Academy, East Dallas Community Schools, KIPP Truth, Big Thought, Educational First Steps, Uplift Education, Make-a-Wish Foundation, Salvation Army, Boys and Girls Club of Pensacola. Smith is married to his wife Patricia (Pat) and together, the couple has a son, Emmitt IV, and daughters Rheagan, Skylar, and Jasmine.

Sherry Stringfield  "Who is Clark Rockefeller?"

One of ER’s original cast members, Sherry Stringfield left the show at the height of her popularity not once but twice in order to pursue other interests. She’s done television mainly but has starred in feature films as well as in numerous off-Broadway productions. She has garnered three Emmy nominations for her role on ER. She once worked on daytime television’s The Guiding Light and on popular primetime drama NYPD Blue. Now she stars with Eric McCormack as the millionaire wife who was charmed and deceived by a notorious conman pretending to be part of one of America’s most rich and powerful families… the Rockefellers. His con game is exposed by the FBI when he kidnaps his daughter after divorcing his wife. Who is Clark Rockefeller? Premieres March 13 on Lifetime Television. 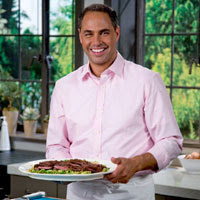 THE SONO BAKING COMPANY COOKBOOK - The Best Sweet and Savory Recipes for Every Occasion -  Foreword by Martha StewartJohn Barricelli is a third-generation baker who began his cooking career more than 25 years ago at the prestigious Culinary Institute of America in Hyde Park, New York. He has worked in New York City restaurants such as River Cafe and the Four Seasons Restaurant, and has been in business as a restaurant owner for 20 years.  The host of "Everyday Baking from Everyday Food" and a co-host of "Everyday Food" on PBS, John is also a frequent contributor to as the Emmy-winning daily, nationally syndicated television series, "The Martha Stewart Show."  John is currently the owner of SoNo Baking Company and Cafe in South Norwalk, Connecticut, which is the inspiration for his forthcoming baking book due in March 2010.

Elana  Amsterdam, - "The Gluten-Free Almond Flour Cookbook"
Eco-entrepreneur and gluten-free guru Elana Amsterdam is the author of The Gluten-Free Almond Flour Cookbook, published by Ten Speed Press in July 2009. On her website, Elana's Pantry, she shares weekly recipes and ingredient selection alongside purchasing, preparation, and meal-planning tips with her readers and visitors (traffic 50,000 unique hits monthly). Visit her website at http://www.elanaspantry.com/  She has written for publications including the Denver Post, the Boulder Daily Camera, Delicious Living, Delight Magazine, and Elephant, and has been featured in a variety of publications including 5280, Working Woman, Crain's New York Business, Fortune Magazine, and the Wall Street Journal, and has appeared on CNN and MSNBC.  Elana lives in Boulder, Colorado with her husband, two boys (chefs in training), two bunnies, and five chickens.