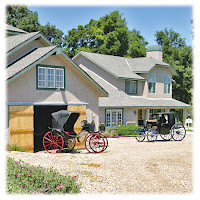 Carriage Vineyards is an active working vineyard and ranch. Our sustainable farmed vineyard consists of 20,000 vines planted on 28 acres with varieties including Grenache, Syrah, Merlot, and Cabernet Sauvignon. About eighty percent of our vineyard is on hillside and hilltops with a north-south and north-east to south-west slopes. Our vines are planted in a rich calcareous clay-lime silt stone, offering perfect conditions for these varietals. When visiting the vineyard you will notice the care that has gone into making its success with row spacing at 10-by-5 and 10-by-6 VSP. Our fruit is sold to wineries from California to Arizona. Guarded by the rolling hills of the Paso Robles California wine country, the Carriage Vineyards Bed and Breakfast offers guests quiet luxury and the extraordinary hospitality of the innkeeper Leigh Anne Farley. Whether you are seeking a romantic getaway or a secluded retreat from the daily rush, our special Paso Robles bed and breakfast will exceed your expectations. 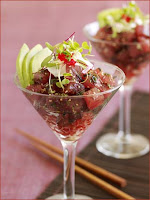 Based on childhood memories of the feelings and flavors of Hawaii, Roy invented what he refers to as "Hawaiian Fusion® Cuisine" — a tempting combination of exotic flavors and spices mixed with the freshest of local ingredients, always with an emphasis on seafood. Born in Tokyo, Yamaguchi vividly recalls visits with his grandparents to Maui, where he had his first tastes of fish, crab, octopus and lobster bought fresh at ocean side piers. Thusly inspired, he graduated from the Culinary Institute of America in New York at the age of 19, where, after several years of intense training, he became a Master Chef. Thoroughly imbued with this discipline, Roy found the confidence to tackle his first experience as executive chef at Le Serene in Los Angeles in 1979. This was followed by a few memorable months at the eternally posh Michael's in Santa Monica, working for California Cuisine originator Michael McCarty. In 1984, he opened his own restaurant in Los Angeles called 385 North. However, the desire to further expand his culinary horizons while getting closer to his roots led Yamaguchi to move to Hawaii in 1988 and open Roy's.

Soon after the original Roy’s opened in Honolulu, Food & Wine Magazine dubbed it the "crown jewel of Honolulu's East-West eateries," and it was named one of Condé Nast Traveler's "Top 50." Gourmet acknowledged Yamaguchi as "the father of modern East-West cooking" while the New York Times described him as "the Wolfgang Puck of the Pacific." Yamaguchi is now regarded as a pioneer who mastered a distinctive style, which brought his cooking to the forefront of contemporary gastronomy. As testimony to his success, there are now 31 Roy's, including 23 in the Continental U.S., 6 in Hawaii, 1 in Japan and 1 in Guam. Honored early in his career with the prestigious James Beard "Best Pacific Northwest Chef" Award, Yamaguchi has hosted six seasons of the PBS-TV show, Hawaii Cooks with Roy Yamaguchi seen on more than 300 stations in all 50 states, as well as in over 60 countries. Equally notable, he was a featured chef on the acclaimed TV Food Network program, My Country, My Kitchen which takes viewers back to his roots in Japan. Yamaguchi has also published three cookbooks; Roy’s Fish and Seafood, Roy’s Feasts from Hawaii and Hawaii Cooks: Flavors from Roy’s Pacific Rim Kitchen.