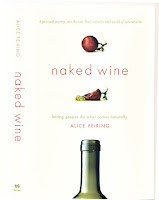 Looking for the perfect gift for your favorite wine-obsessed friend or family member? Naked Wine a memoir by award-winning journalist Alice Feiringis a gift that’s guaranteed to please as Feiring details her experiences making some of the purest wine on Earth. Feiring chronicles her travels during the fall of 2008 when she stripped off her prior notions about what makes great wine and tried her hand at making wine with nothing but crushed bunches of fruit. Feiring writes entertainingly with caustic witdiscussing her skin-on-skin contact with the wine she helped make. Feiring calls herself an “enfant terrible” of the wine industry but she is a star in the journalism world. Her blog alicefeiring.com was named one of the seven best by Food & Wine. She is also the wine/travel columnist for Time and currently writes for the New York Times, the San Francisco Chronicle the Los Angeles Times Magazine among many others.


Chuck Hughes, Host Of "Chuck's Day Off" On The "COOKING CHANNEL" Is Sharing With Us What He Has Planned For His First Holiday Special: "Chuckmas" 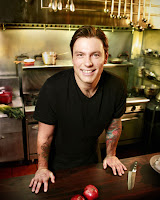 Chuck Hughes, the multi-talented star of Chuck's Day Off and the owner and chef of Montreal hot-spot Garde Manger, has unbridled passion for entertaining that translates into both unforgettable food and captivating television. Chuck was on the fast track to a promising career in advertising, but somewhere along the way, he fell in love with the restaurant business. He enrolled in culinary school and started working at the hottest kitchens around town and hasn't looked back since. In 2006, he partnered with his two best friends to open their own place, Garde Manger. The den-like restaurant where Chuck continues to put his magical spin on comfort foods is as unique as its chef. With vintage crab-shack decor set in a 125 stone house, diners can enjoy Jerk Crab while rocking out to Sam Roberts, and follow it up with a perfectly braised short rib with a side of vintage Beastie Boys. He loves simple cuisine and believes that food is meant to be fun and taste good with no need to be fancy. For his favorite eats, look no further than the tattoos on his arms: lobsters, oysters, bacon and arugula. It was Chuck’s mom who suggested he turn his affair with food into a full-time relationship. He enrolled in culinary school, started working in Montreal’s hottest kitchens and hasn’t looked back since.

In 2006, Chuck and his two best friends opened their own place, Garde Manger. Set in the heart of Old Montreal, this den-like restaurant is where Chuck puts his magical spin on comfort food as unique as its chef. The restaurant quickly developed an almost fanatical clientele of locals and tourists alike. The New York Times was “impressed that a place as rollicking as Garde Manger chooses to pay such close attention to what’s coming out of the kitchen” and the Today show raved about Chuck’s seafood platter. In 2010, Chuck invited the world into his Garde Manger kitchen with his television show, Chuck’s Day Off, which followed him cooking for friends, family or suppliers on the day his restaurant was closed. Sandwiched in between the mouthwatering recipes were rock ‘n’ roll reality segments that gave the viewer insight behind the scenes of one of the city’s hottest restaurants. The show started airing on the Cooking Channel in May 2010 to great response.

The show is now in its third season and airs in more than 20 countries. It has garnered three Canadian Gemini nominations, and Chuck has received the Best Host Award from the original Factual Entertainment Awards in Santa Monica, Calif., which honors top international entertainment programming from around the world. For Chuck, the most defining moment of his career took place this year when he walked into New York City’s Kitchen Stadium and became the youngest Canadian chef to win on Food Network’s popular Iron Chef America. He also became the only Canadian chef to beat the legendary Bobby Flay. The secret ingredient? Canadian lobster. Rounding out a terrific year, Chuck can also be seen on the upcoming season of Food Network’s The Next Iron Chef: Super Chefs, where he will join an all-star group of chefs including Anne Burrell, Michael Chiarello, Elizabeth Falkner, Alex Guarnaschelli, Robert Irvine, Beau MacMillan, Spike Mendelsohn, Marcus Samuelsson and Geoffrey Zakarian as they compete for the ultimate title of Next Iron Chef. And on Cooking Channel, Chuck is taking a break from the daily grind of running his two restaurants as he trades in his black T-shirt and apron for a pair of shades and sunscreen as he travels to Mexico in Chuck’s Week Off: Mexico. Join Chuck as he makes his way across the country in search of culinary adventures and authentic Mexican food.

Also this holiday season on the Cooking Channel, Chuck will be serving up his first Christmas special, entitled Chuckmas. Teaming up with his partners again, Chuck opened a second restaurant, Le Bremner, in Montreal this August. Chuck lives in Montreal and likes escape to nearby Magog with his dog, Fakey, whenever he can.


Yahoo! Web Life Editor Heather Cabot Joins Us To Talk About The Top Recipes of 2011

Year in Review 2011 highlights the top stories, searches, and trends based on what millions of people worldwide searched for, read, and shared. It is a distinct way to portray a society in motion through online behavior. This Year, There’s Some Stiff Competition for Top Search! Charlie Sheen Got Fired, Kim Kardashian Got Married and the World Lost Tech Icon Steve Jobs. Plus, Osama Bin Laden Was Killed, Casey Anthony was Found Not Guilty and the Wall Street Protesters Got Angry . And what were the top recipes? Heather Cabot serves as Yahoo! Web Life Editor. She combines her reporting background with an every woman approach to spot web trends and advocate for consumers. She's a former network news anchor and lifestyle blogger who provides practical tips and perspective on how technology is reshaping our day to day lives.