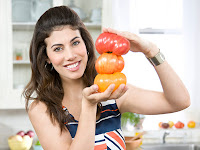 With the nation continuing to be burdened by economic turmoil and most parents using every extra moment to work to earn money for their families, people throughout the country are searching for inexpensive, simple ways to quickly feed their family without sacrificing taste or nutrition. And who better than the host of two hit “Food Network” shows “FIVE INGREDIENT FIX” and “FOOD NETWORK CHALLENGE” and author of the soon-to-be-released cookbook “5 Ingredient Fix: Easy, Elegant and Irresistible Recipes” Claire Robinson to reveal to your listeners speedy, healthy, and delicious meals in five ingredients or less than won’t break the bank.

Claire Robinson combines her passions for food and television in “5 Ingredient Fix”, a “Food Network” series featuring delicious eclectic recipes made with five ingredients or less. Claire believes that the best recipes feature carefully-selected fresh foods with distinct flavors, a straightforward cooking style that also promotes healthy and seasonal eating. Claire is also the host of “Food Network Challenge”, bringing her culinary knowledge and passion for the iconic show to its brand-new set and providing minute-by-minute details of the thrilling challenges. Claire's first book “5 Ingredient Fix: Easy, Elegant and Irresistible Recipes” is scheduled to be released in October of this year (2010).


With a multi-ethnic background, Claire cites her French-speaking grandmother as a major influence on her love for food, a joy passed on through many generations. Born in Jacksonville, Florida, Claire and her family spent time in St. Augustine, Florida; Houston, Texas; and New Orleans, Louisiana; but ultimately settled in Memphis, Tennessee.


A graduate of The University of Memphis, Claire worked at Memphis’ WREG-Television and WMC-FM before attending The French Culinary Institute in New York City. Along with being an accomplished private chef, Claire spent time working on culinary production teams for multiple cooking series, including the “Food Network’s” “Easy Entertaining with Michael Chiarello” and “Everyday Baking for Everyday Food”.


Aside from cooking, Claire enjoys a variety of unique sports, including skydiving, slalom waterskiing, and boxing. Claire lives with her dog Newman in New York City.

For over a decade, Bobbie has been empowering others to embrace their style as a positive form of self expression, and is passionate about communicating ”Style is the way you speak to the world without words.” She encourages everyone to match the ‘outside’ with the best that the ‘inside’ has to offer, and believes you don’t have to Do-It-Yourself, but you should Do-it-Your Way.
As co-host of the Style Network’s Fashion Police, Bobbie helped to not only transform viewers, but trends, by taking from the runway, what could work their way. For the past six years, Bobbie has appeared as both a co-host and guest on a variety of E! Entertainment specials, including their annual red-carpet Emmy, Golden Globe, Screen Actors Guild, and Academy Awards coverage.
Currently, millions of people wake up to catch Bobbie on NBC’s “Today Show,” where she serves as Style Editor. Her weekly TodayShow.com Style Buzz articles have become a popular fixture for the Fashion & Beauty section, and are often pulled to also appear on MSN.com and MSN messenger, as well as MSNBC.com’s home page.
Javier-Pulehu, An Italian Grill