Carole Bloom is a European-trained pastry chef and confectioner, author of ten cookbooks, food writer, cooking instructor, media chef, and spokesperson. In addition, she has worked in world-class hotels and restaurants in Europe and the United States, and has been a consultant for both new and established culinary businesses. 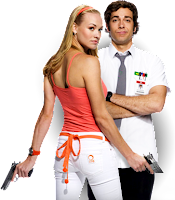 Our favorite secret agent is back in the one-hour action-comedy series. Chuck Bartowski (Zachary Levi, "Alvin and the Chipmunks: The Squeakquel") returns as a regular guy who also happens to be the government's most vital secret agent.
Now that those closest to Chuck know his secret, he must try harder than ever to keep his spy life from interfering with his personal life. But this has never been more difficult - his relationship with superspy Sarah Walker is getting serious, and he's about to take on his most personal mission yet: finding his mother.
This season, Chuck's assignments take him far from Burbank, with each mission bringing him closer to uncovering what happened to his mom, Mary Elizabeth Bartowski (guest star Linda Hamilton, "The Terminator," "Terminator 2: Judgment Day").
The ever stoic Colonel John Casey (Adam Baldwin, "My Bodyguard," "Serenity") returns with partner Sarah Walker (Yvonne Strahovski, the upcoming "The Killer Elite"), one of the CIA's top agents and Chuck's new girlfriend.
Jesse McCartney-Recording Artist

Approximately 5,000 teens die in car crashes each year, making these accidents the number one killer of teens in the United States.  State Farm claims data shows October as the deadliest month for teen drivers.  During National Teen Driver Safety Week, which begins October 18, State Farm and multi-platinum recording artist, Jesse McCartney, are working to create awareness of the dangers of distracted driving.
According to a new research from a State Farm/Harris Interactive survey, teens view the consequences of texting while driving as less severe than those of drunk driving. And parents may not be spending as much time educating their teens on the dangers of texting while driving as drinking while driving.  The reality is texting while driving can have the same dire consequences as driving drunk.
Jesse McCartney is a 23-year-old multi-platinum recording artist, best known for hit singles “How Do You Sleep?” (featuring Ludacris) and “Leavin'” – the latter was a blockbuster smash, spending six weeks at No. 1 on the Top 40 Chart and went on to sell more than 2 million digital downloads on iTunes. McCartney's platinum-selling status began in 2004 with debut album Beautiful Soul, which sold over 1.5 million copies. He’s currently promoting his new single, “Shake,” and preparing for the release of his fourth studio album. The musician and actor is also known for his role in Summerland and recently had a recurring role in ABC Family’s Greek. He also has a role in the upcoming 2011 film The Clockwork Girl.  He is working with State Farm to speak to the distracted driving issue and share information from the company’s new survey data regarding texting while driving vs. drunk driving. McCartney lost a friend in a drunk driving accident when he was a teenager.
Email ThisBlogThis!Share to TwitterShare to FacebookShare to Pinterest
Newer Post Older Post Home