For most of us, entertaining for a crowd or just a few friends can be a daunting task. But you don’t have to be an expert chef to provide flavorful food for your next social gathering. Whether you are hosting a brunch with the in-laws or a casual get-together with the girls, panini are the perfect way to add zing to every occasion . Although a gourmet panino may look intimidating for homecooks, they are actually quite simple – just combine your favorite bread, natural cheese and flavorful ingredients in your panini press and you have a delicious panino in minutes.

Tiffany is a nationally recognized culinary professional and has served as a Foods and Entertaining Specialist with the Southern Living Cooking School. In this role, she been to more than 40 cities every year, delighting large audiences with her cooking demonstrations, menu planning and entertaining ideas. This fall, she will be promoting her first book, 200 Best Panini Recipes, now available online and in stores. She is also spokesperson and contributing editor for Cooking Light, Southern Living, Coastal Living, Cottage Living and Lowe’s Creative Ideas. 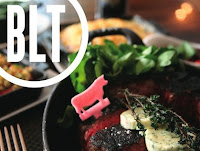 Brian Moyers, the Executive Chef at BLT Steak Los Angeles, combines his vast culinary knowledge with the bounty of local farmer’s market ingredients to create compelling dishes that thrive on simplicity. Not only does Chef Moyers shop at the farmer’s market on a regular basis, he has planted an herb garden on the back patio at the restaurant, allowing him to create new and exciting dishes with homegrown herbs. A firm believer in local products and fresh ingredients, Moyers could speak to the herb garden and simple seasonal dishes.

Nick Leras, President of Russian River Valley Winegrowers, Talks To Us About Hog In The Fog

During the 1830’s, the Russian settlers ventured southeast from Fort Ross in search of more temperate agricultural regions. Outposts were established in the areas of Sebastopol, Graton and Freestone. Wine grapes planted at Fort Ross on the Sonoma coast, and subsequent vineyards started by the settlers throughout Sonoma County, took place well before the Gold Rush of 1849. Although we don’t known exactly when the Russians first planted grape vines or if wine was actually produced from these plantings, we now believe those early plantings at Fort Ross were the first in Sonoma County. The Russians summarily abandoned their foothold in Northern California around 1841. The migration of subsequent settlers, many from wine-producing European countries, continued to develop this initial viticultural venture, establishing the foundation for what would become a flourishing industry within the Russian River Valley.

By 1876 viticulture was well established in the Russian River Valley. It is recorded that the region produced in excess of 500,000 gallons of wine, with about 7,000 vine acres planted. Larger wineries began to flourish, including The Santa Rosa Wine Company established in 1876, Martini & Prati Winery in 1880, Korbel Champagne Cellars in 1882 and Foppiano Winery in 1896.

During Prohibition, the Russian River Valley saw drastic changes and an overall decline in wine production. Many of the wineries that surfaced during the late 1800s and early 1900s did not survive the severe restrictions placed on all alcohol production and consumption.

From 1920 to1933 wine production was severely limited, forcing many wineries out of business. Those who wanted to continue to make wine legally were forced to produce only 200 gallons of non-intoxicating cider or fruit juice per year for household use; though some were brazen enough to disregard the production regulation. Prohibition ended in1933 with the repeal of the 18th Amendment; however, by then less than 50 wineries remained within Sonoma County.

The current era in Russian River Valley winemaking began in the 1960’s when Bob Sisson, the University of California Farm Advisor for Sonoma County, began urging local growers to turn their focus toward cool climate grapes like Chardonnay and Pinot Noir. Smart farmers listened, and the rest is… history.