"We believe wine is fun, so we do fun things" said Dennis, just before leaving to go ice fishing with trade associates and consumers in Chicago. Dennis created the "Good Life Series" to build memories with consumers and give them an opportunity to appreciate healthy food and great wine with some of their favorite pastimes. 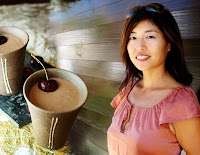 Ani Phyo is the author of “Ani’s Raw Food Kitchen”, and is the founder of SmartMonkey Foods, LCC. Watch her free uncooking videos at http://www.aniphyo.com/.

Chick-fil-A is a restaurant chain headquartered in College Park, Georgia, United States that specializes in chicken entrées.[1][2] It is the second-largest chicken-based fast-food chain in the United States (behind Kentucky Fried Chicken).


Though long associated with the southern United States, the chain has since expanded into much of the nation (see map below). As of December 2009[update], the chain has over 1,600 locations in 38 U.S. states and the District of Columbia.

Famous for being closed on Sundays, in a interview with ABC News's Nightline, Dan Cathy (son of company owner S. Truett Cathy) told Vicki Mabrey; "He wanted himself and his employees to spend time with family and worship."

Jason Kilar serves as the CEO of Hulu. Jason joined Hulu after nearly a decade of experience at Amazon.com where he served in a variety of key leadership roles. After writing the original business plan for Amazon's entry into the video and DVD businesses, he ultimately became Vice President and General Manager of Amazon's North American media businesses, which included the company's books, music, video, and DVD categories. He later served as Senior Vice President, Worldwide Application Software, where he led an organization of hundreds of world-class technologists and reported directly to CEO Jeff Bezos. Jason began his career with The Walt Disney Company, where he worked for Disney Design & Development. He received his M.B.A. from Harvard Business School and graduated Phi Beta Kappa from the University of North Carolina, Chapel Hill, where he studied Business Administration and Journalism & Mass Communication.
Email ThisBlogThis!Share to TwitterShare to FacebookShare to Pinterest
Newer Post Older Post Home