Once a part of a secret community of world-class geniuses doing cutting-edge research, Matt (Brady Smith) and Claire (Kellie Martin, ER), with the aid of their teenage son, Brody (Justin Kelly), must stop their former colleague Edwin Jensen (David Andrews) who has now gone bad.


In this roller coaster adventure Matt, Claire and Brody race against the clock following clues, thwarting evil schemes and rediscovering each other in the process. Ultimately, they not only fight to stop the rogue geniuses, but also rediscover their family bond. Also starring Patricia Richardson (Home Improvement), David Andrews, LeVar Burton (Star Trek: The Next Generation), and Alyssa Diaz (As the World Turns).


Colleen Burns-"Mom on the Run" 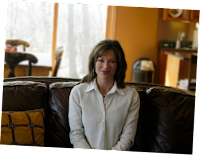 I haven’t always been a Mom on the Run.  I used to chase stories as a reporter and anchor for a national news network, and covered local beats for CBS affiliates in Illinois and Minnesota.  I was also producer for the nationally syndicated Emmy Award winning show “Smarter Living”, and contributed regularly for PBS and The Weather Channel.  Once I started having kids (...and kept having them) I realized time-management had become my biggest job.  If I could just get time on my side I might have a fighting chance at this Supermom-thing.  So, I began searching out the best products, the quickest recipes, timesaving gadgets...you get the idea.
Time.  It’s a bugger.  But, it doesn’t have to rule our lives.   There are products out there to help us.  Look around the web site, and see what works for you.  And if you have any ideas, let me know.  We gals have to look out for each other.
Email ThisBlogThis!Share to TwitterShare to FacebookShare to Pinterest
Newer Post Older Post Home