Charlie Scola, "Party Charlie" -  Celebrity party planner
With New Year's Eve this weekend, here's an expert to discuss HEALTHY PARTY PLANNING tips for a small gathering or larger party. Celebrity party planner Charlie Scola, "Party Charlie" as he's affectionately known, has been planning parties and catering to celebrities, politicians and corporate executives for 30 years.   "The best advice I can give anyone is party, celebrate and socialize your way to health and success," says the author and innovator in the food and catering industry, who resides here in Southern California. Charlie's new book is titled "Party Planning Secrets:  The Ultimate Guide to a Successful Party."   Charlie believes you can "party hearty," but you should do it with a healthy attitude.  Socializing is very

beneficial for health reasons, he believes.  "Doctors suggest to party, celebrate and socialize to boost your immune system, and social contact in a friendly, upbeat environment is extremely reinforcing to who we are.  By nature we are social creatures."  Secondly, happier people live longer.  "Studies have revealed that people who have a strong social support system have a greater sense of well-being," he said.  "And those who are socially isolated are at increased risk for poor health and dying." Charlie adds, "We need to jump into the game of life." Over the years, Scola has planned parties for, with, and in honor of, a lengthy list of celebrities and personalities, including A-list actors, rock stars, sports stars, political dignitaries and high level military personnel including Elton John, Tom Cruise, Bon Jovi, John Travolta, Bill Maher, Dana Carvey, Angela Landsbury, Bruce Springsteen, Dolly Parton, Stevie Wonder, Julio Iglesias, Barry Manilow, Diana Ross, Sen. Ted Kennedy, the Vice Premier of the People's Republic of China and the Crown Prince of Saudi Arabia.  He orchestrated the grand opening of City Walk at Universal Studios Hollywood for 7,000 guests, the Millennium Christmas Party at the Playboy Mansion, as well as private affairs for L.A. Mayor Antonio Villaraigosa, the City of Beverly Hills and the City of Hermosa Beach.  "I always tell people to party, celebrate and socialize your way to health and success. You'll lift everyone's spirits and your party will be successful."

Phillip Lamarque  -  "Best Eatz"
The way the guests feel about your restaurant has a lot to do with factors so far away from the food. Sounds and the way the room respond to the noises created by people talking, wait staff, door opening, music background create ta critic acoustic level that will make the room pleasant or create a psychological uneasiness. Most restaurant are not designed to create a apropriate surrounding for the sound level to be pleasantly acceptable.

Hard surfaces, refrigeration coming from the bar area, or even near by walk-ins or simply exhaust from air conditioners or fans. Kitchen noises might even be spreading out in the dining area in many cases. The Lombard effect is created by the mere fact that people will speak louder to over come the surrounding noise level to being heard, the customers speak louder to make themselves heard, as the place gets noisier, so do customers and sound levels spiral upward. How to cope with the situation? There are several ways to cope with this problem. Fabric to cover hard surfaces will absorb noise. Sound-dampening panels, composed of open-celled foam or fiberglass, absorb sound waves, converting the energy to heat; the panel can be installed behind dropped ceilings and on walls.

Aline Baly, owner of Château COUTET in Barsac, France
Château COUTET is one of the oldest vineyards in France's Sauternes wine region, with historic beginnings in 1643.  The winery received its "First Growth" designation in 1855. The property has a history that reads like an historic novel. The physical property itself includes two towers believed to originate from the time of Aquitaine's English occupation in the late 13th century, a 14th century chapel, and two 18th century towers, plus the longest Sauternes winery, housing more than 860 barrels.  The ownership history is equally

impressive beginning with original owner, Charles le Guerin, Lord of COUTET, and counselor at the Bordeaux Parliament and then moving on to Jean le Pichard, from 1695 to 1788, during which time former U.S. president Thomas Jefferson noted COUTET as "the best Sauternes originating from Sauternes-Barsac."  With any great novel, tragedy also makes an appearance as with subsequent property owner Gabriel-Barthelemy-Romain de Filhot who lost not only the property to the French Revolution, but also his head.  Château COUTET was later inherited by Marquis Romain Bertrand de Lur Saluces, owner of Château d'Yquem, Château Filhot and Château de Malle and thus became the largest producer of sweet white wines in the world.  Château COUTET remained under the care of the Lur-Saluces family until 1922 until Henry-Louis Guy, a hydraulic wine press manufacturer from Lyon, purchased Château COUTET, separating the estate from Château d'Yquem. The vertical presses installed by Guy are still used today at each harvest and it was under his tutelage that the renowned "Cuvée Madame" was first made to honor his wife.  In 1977, the estate was sold to Marcel Baly, who immediately undertook extensive renovations of the property. His two sons, Philippe and Dominique, have since maintained a continuous renovation program with restoration and re-planting of the 38,5 hectares of vines, optimization of all the work processes and operations, rebuilding the cellar and winery and, ultimately, the château itself. In 1994, Philippe and Dominique Baly signed an agreement with the Baroness Philippine de Rothschild, giving exclusive distribution rights to her company, Baron Philippe de Rothschild S.A. And now, French-born and US-raised daughter of Dominique Baly, Aline, has become the face and voice of the family winery.  The interests of this arrangement are multiple: a great historic French brand operated by an American; a youthful voice for an historic brand; the security of continued generational ownership.

Steve Evans "The Movie Guy"
Tips on the best & worst this weekend at the Box Office. Steve reviews and 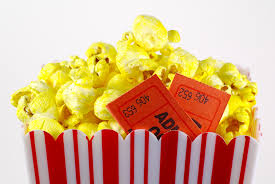 comments on all the latest from Hollywood and gets the story behind the film.A veteran of the industry, "The Movie Guy" says exactly how he feels about the movies that you will be watching this weekend. Mike Horn comments on the lineup of big screen offerings but does not always agree with what Steve has to say. This is the movie review program to listen to every week and get the "real deal".
Email ThisBlogThis!Share to TwitterShare to FacebookShare to Pinterest
Newer Post Older Post Home