Welcome to the weekend edition of "What's Cookin" and for the second weekend in December we have a great show lined up.  Luke Goss from "Hell Boy" is on SYFY's movie of the week this weekend -  "Annihilation Earth"  Larry Van Aalst the Sommelier at the equus Restaurant at Fountain Grove in and a CRN  host is on the show amd Gina Doyle the GM  from The Tam O'Shanter - Los Angeles , a legendary Lawry's restaurant location will be here. Steve Evans as all the movie pics and a very special talk with a very special guy - Danny Cahill Season 8 Grand Prize winner from The Biggest Loser will talk about the money he won and all the weight he lost. 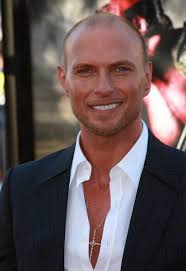 Luke Goss (Syfy's "Annihilation Earth"  - 12/12/09 at 9pm ET  stars in Syfy's original Saturday night film, ANNIHILATION EARTH which airs 12/12/09 at 9pm ET. It co-stars Marina Sirtis (Star Trek: The Next Generation).  LUKE GOSS plays ‘Prince Nuada’ in Hellboy II: The Golden Army, Guillermo del Toro’s critically-acclaimed Hellboy sequel that opened in the number one spot atop the U.S. box office this July. A role that earned him 2 MTV Movie Award nominations. He recently completed the starring role in Tekken, a sci-fi feature thriller based on the popular video and arcade game. He has just been attached to play ‘Kristoff,’ in a big screen adaptation of the Top Cow comic book, Magdalena, being developed and produced by Gale Anne Hurd’s Valhalla Pictures, Platinum Studios and Top Cow. Goss has recently completed filming his first role for network television in JJ Abrams “Fringe.”  Goss started his acting career playing ‘Danny Zuko’ in the smash hit musical Grease, on London’s West End, and later toured with the production throughout the United Kingdom.  He established himself as a screen actor in 2002 with performances in two very different features:  David Goyer’s independent drama ZigZag, with John Leguizamo, Oliver Platt, Natasha Lyonne and Wesley Snipes; and Guillermo Del Toro’s supernatural action feature Blade II, with Snipes and Ron Perlman.  The following year, he starred in the title role of the critically-acclaimed British gangster film Charlie, and in the title role in the Emmy Award-winning Hallmark miniseries Frankenstein, with Donald Sutherland and William Hurt. In 2005, Goss traveled to India for the title role in the Biblical epic One Night With The King, opposite Omar Sharif and Peter O’Toole. Recent film credits also include The Man, with Samuel L. Jackson and Eugene Levy; Mercenary, with Steven Seagal; Bone Dry, with Lance Henriksen; Unearthed, with Emmanuelle Vaugier; Deep Winter, with Michael Madsen; and Shanghai Baby, with Bai Ling.

Gina Doyle - GM  Tam O'Shanter - Los Angeles
Delighting diners for over eight decades, the Tam O'Shanter is Los Angeles' oldest restaurant operated by the same family in the same location. It has been said that our customers are willing to dance a jig for the fine food and old world atmosphere of this cozy Tudor inn. If you've got some Scottish ancestry, you might even find your family tartan among the extensive collection which decorates the walls of our several dining rooms.In 1922, you could crank up the engine of your Hupmobile, lurch through the dust and ruts of a country road, and arrive at a convivial old-world inn. Established by Lawrence Frank and Walter Van de Kamp, the restaurant offered hearty food and amiable service. Tom Mix, Fatty Arbuckle, Mary Pickford, John Wayne and Walt Disney and members of his studio were regulars in the early days of the "Tam." In fact, the Disney people had lunch here so often, some referred to it as the studio commissary. Times changed, and so did the Tam O'Shanter. In 1968, following a revamping of the menu and a major remodeling, the restaurant was renamed the Great Scot. As the years passed, improvements continued to be made. But the important things have stayed the same, particularly the sense of pride among everyone involved in our operation. We are especially proud of our co-workers - some of whom have given us over four decades of service.  It is that spirit that has distinguished this restaurant since the day its doors first opened. It is what has kept people coming here through the years, knowing that in this place they will find something more than quality dining. And in that spirit, it seemed entirely appropriate in 1982, in honor of our sixtieth anniversary, to change the restaurant's name back once again to the Tam O'Shanter. Nowadays, that dusty road where it all started is a busy city boulevard, and the rolling countryside around our inn is no longer exactly wilderness. Our inn is, however, still a convivial haven and still ours: the oldest restaurant in Los Angeles owned and operated by the same family in the same location. Today, over eighty years later, stewardship of the restaurant is in the hands of the second and third generations of the Frank and Van de Kamp families. They, like their forebears, remain "Scots by affection," offering hearty food and heartwarming drink, served with a cheerful "welcome."

Steve Evans "The Movie Guy"
Tips on the best & worst this weekend at the Box Office. Steve reviews and comments on all the latest from Hollywood and gets the story behind the film.A veteran of the industry, "The Movie Guy" says exactly how he feels about the movies that you will be watching this weekend. Mike Horn comments on the lineup of big screen offerings  but does not always agree with what Steve has to say. This is the movie review program to listen to every week and get the "real deal"

Danny Cahill - Seaon 8  "Biggest Loser"  winner
Season 8 of The Biggest Loser was all about second chances, especially for newly crowned winner Danny Cahill. The 40-year-old from Broken Arrow, Okla., was an overweight teen who managed to lose the weight and pursue his dream of becoming a successful musician. After falling off the wagon and gaining the weight back, though, Danny became determined to shed the weight once and for all. By the season finale, he lost 55 percent of his body mass, ending up at 191 pounds. So how did Danny stick with his weight loss routine off the ranch and claim the title? "I was a stickler with what I put in my body," Danny told TVGuide.com. "I kept the workouts the same as I did on the ranch; I did that with the help of my family because they supported me wholeheartedly in the process." The land surveyor and father of two beat fellow finalists Rudy Pauls, 31, who lost 52.94 percent to get down to 208 pounds, and 19-year-old Amanda Arlauskas, who lost 34.8 percent of her body weight and currently weighs 163 pounds. Cahill says the program's toughest challenge was the marathon. "Running was definitely not my strong point. I was still 288 pounds and to know that in just 60 days I was going to have to run a marathon, that was a scary thing," he says. "The way to conquer your fears is to just go out and do them. It felt great going across that finish line with Liz — something we never thought we would do before." The Biggest Loser Season 9 premieres Tuesday, Jan. 5 at 8/7c on NBC.
Email ThisBlogThis!Share to TwitterShare to FacebookShare to Pinterest
Newer Post Older Post Home