International Travel Expert Stephanie Oswald Provides Insider Tips  on Where to Go, What to Pack, and Getting the Most for Your Travel Dollar…

As the Editor-in-Chief of travelgirl magazine, a Web Correspondent for The Weather Channel, and seasoned travel correspondent for CNN, she has reported on everything from stress-relieving spa treatments and unique escapes around the world to the human side of a hurricane. She is the co-founder of travelgirl -- the first national travel magazine to launch after the events of 9/11. The travel and lifestyle publication was chosen by industry leader Mr. Magazine as one of the "most notable" launches of 2003. Oswald is a native New Yorker who spent 13 years globetrotting as CNN's travel correspondent and host of the weekend program, CNN Travel Now. In 2003, she also launched a groundbreaking series called The Weather Channel Road Crew that showcased the "fun" side of weather. In 2004, she filed written and audio reports during Hurricanes Ivan and Jeanne as the very first Web Correspondent for Weather.com.  As anchor and correspondent for CNN Travel Now, a weekly program on worldwide destinations, travel trends and cuisine, Oswald specialized in adventure travel, filing reports from Europe, South America, Asia and the Caribbean. One series took her into the depths of Papua New Guinea for a rare and eye-opening look at the Huli Wigmen. Her reports also appeared on CNN Headline News, CNN in-flight programming for Delta Air Lines, CNN International and the CNN Airport Network. Immediately after 9/11, she filed human interest stories on the crisis for CNN, and covered the impact on the travel industry during live studio reports on CNN Headline News.

Sciandri Family Vineyards is a small family owned and operated winery in the heart of Coombsville in the Napa Valley. Drawing from it's roots in a small village in Italy, Quercia, the Sciandri Family is excited to begin a new venture into the world of wine.

We welcomed 175 members of the wine trade and media to come explore the wonderful wines of Coombsville. A big Thank You to all those who were able to make it out, and if you missed it we hope to see you next year. Special thanks to Porter Family Vineyards for hosting the event in their amazing caves. Marks the Spot and Oxbow Cheese Merchant for supplying the wonderful bites to eat, and CVG board members Curtis Strohl with Ancien, Rebecca Griffin with Sciandri Vineyards and Tim Porter with Porter Family Vineyards for chairing the event. Coombsville Vintners and Growers are proud to have participated in Premiere Napa Valley 2013, donating 900 bottles of wine with 10 lots and raising over $127K as a group.

RESTAURANT GURU WILLIE DEGEL CONTINUES TO SAVE RESTAURANTS ONE EMPLOYEE AT A TIME IN RESTAURANT STAKEOUT! Season Three Premieres Wednesday, March 13th at 10pm ET/PT. New York restaurateur Willie Degel is back for the third season of the hidden camera series Restaurant Stakeout, premiering Wednesday, March 13th at 10pm ET/PT on Food Network. Using his infamous and covert surveillance tactics, Willie shows struggling restaurant owners what really happens when their employees think no one is watching. Willie has built his success on his "customer is king" philosophy, which remains the key to saving restaurants around the country from closing their doors. From lazy, neglectful managers to feisty, rude waitstaff Willie needs to whip these employees into shape before their appalling customer service drives business away for good.

FOOD NETWORK is a unique lifestyle network, website and magazine that connects viewers to the power and joy of food. The network strives to be viewers' best friend in food and is committed to leading by teaching, inspiring and empowering through its talent and expertise. Food Network is distributed to more than 100 million U.S. households and averages more than 9.9 million unique web users monthly. Since launching in 2009, Food Network Magazine has tripled its rate base and delivers a circulation of 1.5 million. Headquartered in New York, Food Network has a growing international presence with programming in more than 150 countries, including 24 hour networks in Great Britain, India, Asia and Africa. 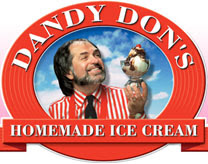 In 1981 Don and his lovely wife Linda (pregnant with their second child) bought an ice cream shop in Tarzana, California called The Creamery. They thought it would be a gold mine. They were wrong. So they worked their keesters off, got into the wholesale business, and began a catering division. These are photos of Don (photo on the left, 3rd from the left) and Linda (photo on the right) at one of their first hot fudge sundae bar catering gigs at the Directors’ Guild of America. This is how the catering division of their company—now with over 1,000 customers—got its start.  He loves talking to his clients, making ice cream with them, and helping them promote their businesses. He loves selling his ice cream to new clients, finding out what they want, tempting them with great service. He just loves people. And he loves making people happy. Good thing he makes great ice cream
Email ThisBlogThis!Share to TwitterShare to FacebookShare to Pinterest
Newer Post Older Post Home