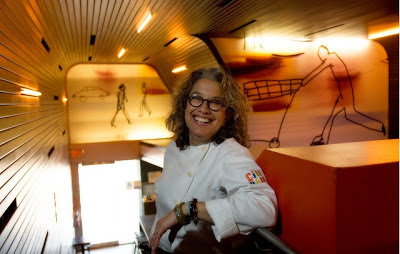 Susan Feniger’s passion for food has propelled her into a three-decade career as a successful chef, restaurateur, cookbook author, and media darling, with the Los Angeles Times recently saying, “She deserves an Emmy for energy." She spends most days dividing her time between her first solo venture, Susan Feniger’s STREET, and the Border Grill restaurants in Santa Monica, Downtown LA, and Las Vegas at Mandalay Bay Resort & Casino, as well as the Border Grill Truck--all co-owned with Chef Mary Sue Milliken. A veteran of nearly 400 episodes of Food Network's "Too Hot Tamales" and "Tamales World Tour" series along with Milliken, Feniger has also appeared on season two of Bravo's “Top Chef Masters,” “The Today Show,” “Chef vs. City,” and “The Best Thing I Ever Ate," as well as in print for magazines such as Gourmet, Sunset, Bon Appétit and O, The Oprah Magazine. Feniger has co-authored five cookbooks including City Cuisine, Mesa Mexicana and Cooking with Too Hot Tamales with Milliken, as well as her most recent solo endeavor, set for release in July of 2012, Susan Feniger’s STREET: irresistibly crispy, creamy, crunchy, spicy, sticky, sweet recipes.
Susan shines a light on a number of worthwhile organizations and has been on the board of the Scleroderma Research Foundation for 17 years and the board of the L.A. Gay & Lesbian Center for three. In all her endeavors, Susan’s genuine love for the authentic flavors of street and home cooked food has been her driving force and she shows no signs of slowing down.

As Official Sponsor of Couchgating, KFC Invites Armchair Quarterbacks Everywhere to Become Couchgate Hall-of-Famers KFC Partners with ThePostGame.com on an Innovative Athlete and Celebrity Video Series  There's watching the game and then there's "couchgating," the act of enjoying a big time sporting event from the comfort of your couch. KFC, Official Sponsor of Couchgating™, understands that the latter hinges on a few key factors – a comfy sofa, a group of friends, and most importantly, the right game-day food. With that in mind, KFC is introducing the Gameday Bucket: 8 pieces of chicken, 8 Hot Wings® and 10 Original Recipe® Bites, sure to be the MVP of any game watching party. "When having people over to watch the big game, we know that people only get one shot at impressing their friends and family," said Jason Marker, Chief Marketing Officer for KFC US. "That's why KFC is coming to the rescue with the Gameday Bucket. It's food worthy of the game!"