What's Cookin' Today Hour ONE:
Tim DeKay Tells Us About His Role on USA's White Collar!

Tim DeKay stars as Peter Burke in USA Network’s original series WHITE COLLAR with all-new episodes from season two to premiere on Tuesday, January 18 at its new time, 10/9.
DeKay has vast experience on stage, television and in feature films. He starred on HBO as a series regular in both the award winning series “Carnivále” and “Tell Me You Love Me” for multiple seasons.
DeKay’s recent feature work includes “Get Smart,” “The Chumscrubber,” HBO’s “Walkout,” “Peaceful Warrior” and “Control,” in which he starred opposite Ray Liotta and Willem Dafoe. He was also seen in the independent feature “Welcome to the Neighborhood” and the critically-acclaimed “Big Eden.” DeKay’s other feature work includes “Swordfish” and “If These Walls Could Talk,” among others.
DeKay is well known for his extensive theater resume. He was seen on Broadway in “The Show-Off,” off-Broadway in “Billy Budd” at Circle in the Square, and in the National Tour of “The Lion in Winter.” His regional theatre work includes “Burning Blue” at The Court Theatre in L.A. (receiving an LA Weekly nomination for Best Actor), “Someone to Watch Over Me” and “Star Fever” at the Deven Center (where he is a company member), “The Merchant of Venice” at Hartford stage, and he has performed at the Cleveland Playhouse, Cincinnati Playhouse, Penguin Repertory, Indiana Repertory, Levin Theatre and Pasadena Shakespeare, among many others.
DeKay’s other television credits include recurring roles on “Brothers & Sisters,” “The New Adventures of Old Christine,” “My Name Is Earl,” “Everwood,” “Party of Five” and “Seinfeld” as the classic Bizarro Jerry. His numerous guest-star appearances include roles on “CSI,” “Without A Trace” and “Friends.”
DeKay can also be occasionally heard on NPR performing in both classical and new plays for L.A. TheatreWorks and he is a lifetime member of The Actors Studio. His education includes a B.S. from Le Moyne College and an MFA in Acting from Rutgers University where he met his wife, actress Elisa Taylor. They currently reside in Los Angeles with their two children.
Cristian Mejia Branding and Merchandise Development of LA's Mademoiselle Boutique Talks About Fashion at the Oscars!

Mademoiselle is a style conscious and trend-savvy boutique. A haven for shoppers looking for a source of the sexiest, trendiest and hottest fashions at the greatest value.
About Cristian:
Then and Now: He was born and raised in the San Fernando Valley. He currently live within walking distance of his store in Old Town San Fernando with his Australian Shepherd, Violet.

Bona Fides: Studied Architecture @ John F. Kennedy Architecture Magnet in high school; dropped out of UCLA to pursue his love for fashion; slaved as a styling assistant, personal shopper, personal stylist and image consultant for 7 years; opened his dream boutique, Mademoiselle, in September of 2010. There's nothing like paying your dues!

A Few Favorite Things: Vintage T-shirts and his collection of fedoras 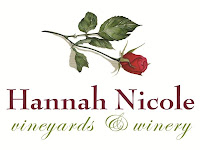 Neil and Glenda Cohn started with 10 acres of land and countless hours spent working in the garage on weekends. From there, our passion quickly grew into a mission of creating boutique, handcrafted wines for more than just family and friends.
Purchasing 80 acres of prime land on Balfour Road in Brentwood, they watched the dream of Hannah Nicole Vineyards unfold. At first, they planted Bordeaux varietals. Then they added Rhone varietals. From these varietals, we now produce more than 15 wines. Their flagship Viognier and Meritage demonstrate the sophistication and distinction that are uniquely characteristic of wines from Contra Costa County.
As their vineyards continue to expand, their wine will soon enjoy the mark of being 100 percent estate grown. Their vineyards currently include 41 acres of red Bordeaux varietals (Cabernet Sauvignon, Cabernet Franc, Petit Verdot, Merlot and Malbec), six acres of white Bordeaux varietals (Sauvignon Blanc), 15 acres of red Rhone varietals (Syrah, Petite Sirah, Mouvedre and Grenache), six acres of white Rhone varietals (Viognier) and five acres of Italian varietals (Zinfandel). Their red vintages are pruned and thinned to produce between three and five tons of fruit per acre, enhancing the flavor and intensity of their wines. Their white varietals, which are produced from their Estate grown Sauvignon Blanc and Viognier, are pruned to produce four to six tons of fruit per acre. They also utilize multiple clones of certain varietals to provide more depth of flavor and characteristics that are unique to each.
Since farming is all about timing, they make every effort to stay one step ahead of Mother Nature. Using technological innovations such as water sensors helps them monitor the moisture content of the soil – a requirement that is necessary when practicing Regulated Deficit Irrigation (RDI). A key process that allows the grapes to be kept in a constant state of moderate water stress, RDI enhances their varietal flavors.
For more info on this winery, visit their website at http://www.hnvwines.com
Chef Joseph Gillard Gives Us A Tour of the Napa Valley Grille in Westwood Village! 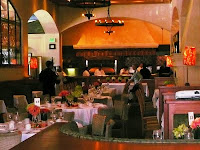 Wine country meets Hollywood at Napa Valley Grille in Westwood Village. Local, seasonal ingredients and a vast array of wines are served in a rustic, yet refined setting suitable for a pre-theater dinner for two, or a business lunch with top celebrity clients.
The wine country warmth in the main dining room is illuminated by the earth-toned hues, wooden harvest table, farm-fresh floral displays, wine artifact pieces, rustic lighting fixtures and an exhibition kitchen.
Before the Food Network and celebrity chefs, Joseph Gillard found inspiration from the earlier days of cooking television. At the age of five, he was mesmerized by Julia Child, declaring to his mother that he would one day become a chef. The budding culinary enthusiast was only ten when he read his first cookbook, Child’s Mastering the Art of French Cooking, from cover to cover.
Gillard was raised in Freemont, Mich. on a 40-acre homestead where his mother, a single parent, raised goats, chickens, rabbits, pigs, pheasants and cows. The family’s large vegetable garden and market stand where they sold their goods provided sustenance and income for the family, making a lasting impression on Gillard as to the integrity and beauty of local and seasonal food products.
His transition into a serious culinary career came in 1987 when he joined the kitchen staff of the Amway Grand Plaza Hotel in Grand Rapids, Mich. His next job was Executive Sous Chef at Egypt Valley Country Club, also in Grand Rapids, coordinating daily dining services for up to 1000 guests. Intrigued by the city’s culinary culture, Gillard moved to Los Angeles in 1993 and secured a job at Joachim Splichal’s Pinot Bistro in Studio City.
Over the next eight years, Gillard served as an integral part of the Patina Group kitchen. During his tenure with the Patina Group, Gillard played a significant role among the participating chefs for several Emmy and Grammy dinner galas.
In 2001, Gillard moved to Boca Raton to open his own catering company, but California beckoned, and thus he returned to Los Angeles in 2002 to become Executive Chef at Mirabelle on the Sunset Strip.
Gillard joined Napa Valley Grille in 2007 as Executive Chef. With his upbringing on the farm and strong relationships with California farmers, his culinary signature is a perfect fit for the wine country cuisine of Napa Valley Grille. Gillard, a Sherman Oaks resident, regularly contributes his time to several Los Angeles fundraisers, including Meals on Wheels, the Los Angeles Opera Wine Auction and the Elizabeth Glaser Pediatric AIDS Foundation.
Andrew Apodaca Gives Us the Oregon Wine Report and Tells Us About the Pyranees Winery Gold Medal Chardonnay! 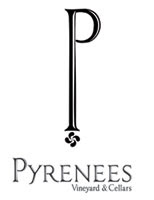 Apodaca family’s commitment to the superb quality of their wines is evident in its excellent quality and distinction. Pyrenees Vineyard and Winery pulls many of its influences from the Basque country of northern Spain where the Apodaca’s Heritage was originated. Pyrenees Vineyard and Cellars brings to you their many varietals of wines from the finest Oregon grapes influenced by the textures of the rich soil, the abundant vegetation and mild climate of the Umpqua Valley.
Pyrenees Vineyard and Cellars sets along the South Umpqua River surrounded by 30 acres of lush grapes and rolling hillside. You will find sitting out on the vineyard’s deck overlooking the river extraordinary, while you take pleasure in one of our indescribable wines. Come walk through our long rows of beautifully intertwined grape vines and smell the aromas in the earth and wind that you find as welcoming on your palate as you take each sip of our Vino.At Pyrenees Vineyard and Cellars we have a wonderful group of people who will welcome you as old friends and take you through our majestic wine selection. A place where relationships are created that last life times and memories will be made that last through-out countless generations!
Don't forget to "Like" CRN's Facebook Page: http://www.facebook.com/crntalkAnd "Like" Our What's Cookin' Today Page, too! http://www.facebook.com/pages/Whats-Cookin-Today-Radio-Show/180963171920067
Email ThisBlogThis!Share to TwitterShare to FacebookShare to Pinterest
Newer Post Older Post Home