Sarah Quider began her winemaking career at Ferrari-Carano in1995, when she was hired as a harvest intern. Sarah then worked at Jordan winery from 1999 to 2003, while also completing a degree in Viticulture and Enology from the University of California, Davis. Sarah returned to Ferrari-Carano in 2003 as assistant winemaker, and was quickly promoted to associate winemaker in charge of the Russian River White Wine Program. As winemaker for the White Wines Program, Sarah will build on the foundation that George Bursick established; the tradition of employing gentle winemaking techniques, blending wine for style, quality and the multidimensional complexity that characterizes Ferrari-Carano’s wines. “My goal is to make complex, intense and seamless wines that are balanced in both richness and delicacy,” said Sarah. “We have such tremendous diversity in our vineyards because we are located in various appellations, each with unique micro-climates, soils and clones. I am looking forward to expressing that diversity in our wines.” Sarah has two children, Cameron and Sophia, enjoys snow skiing and spends what is left of her free time remodeling her home.

This week, “The Biggest Loser: Couples” contestants get encouragement from Dallas Cowboys quarterback Tony Romo, and helpful advice from two past season winners – Helen Phillips (season seven) and Erik Chopin (season three) – on the episode airing Tuesday, May 11 (8-10 p.m. ET) on NBC. First, the five remaining players get some game-changing news from host Alison Sweeney: there will be no yellow line this week, just a red line. So friendships and alliances won’t help those who are left – whoever falls below the red line will go home automatically, leaving this season’s final four. The tension mounts, especially for one player who struggles to appreciate all they have accomplished so far. Then trainer Bob Harper surprises the contestants with an introduction to Dallas Cowboys quarterback Tony Romo while they are out shopping. The NFL superstar encourages the contestants and talks about the inspirational role models they have become before taking them on a hike with Bob.  Later, they also get surprise visits from two past season winners – Helen Phillips and Erik Chopin. While Helen has maintained a healthy weight since winning season seven, Erik has openly struggled with his weight and gained back much of what he lost. He talks very candidly about his challenges and his plan to get back on track, and Helen shares helpful advice about keeping the weight off once they leave the ranch. 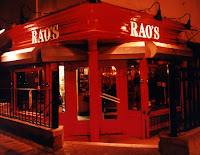 Rao's is renowned for its jukebox, its quirky decor, its unmatched hospitality and most of all, the spectacular Neapolitan cuisine. It's also notorious for being one of the most difficult restaurants in New York in which to get a reservation. Year-long waits for one of its ten tables are not uncommon. But what is it about this tiny, charming restaurant that makes it the most in-demand spot in the city night after night, year after year?   For decades Rao's existed as a neighborhood restaurant. Its local customers would fill the tables with such regularity that eventually they were given standing reservations - bookings that persevere to this day. The Rao's phenomenon exploded in 1977, when New York Times food critic Mimi Sheraton gave Rao's a gushing, half-page, three-star review, splashing the city's best-kept secret in front of millions of readers.  Since Rao's NYC location only has ten tables, and only one seating per evening, the resulting demand would have been overwhelming even if the tables weren't already spoken for. That the tables were "owned" like a condominium translated to almost no empty seats in the house, night after night. 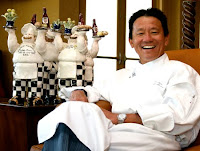 Culinary Extravagance at our Napa Valley Restaurants and the surrounding wine country area provide a cornucopia of fresh produce, herbs, meats, seafood and cheeses for your Napa Valley dining pleasure. Executive Chef Peter Pahk was recently awarded with the 2008 Napa Valley Mustard Festival's Peoples' Choice Award. He was also the winner in 2005 & 2006 .

Whether you are looking for a fine dining experience in Napa Valley, casual fare, quick snack or a place to relax and contemplate your day, Silverado Resort is the place for exceptional restaurants in Napa Valley.
Email ThisBlogThis!Share to TwitterShare to FacebookShare to Pinterest
Newer Post Older Post Home