The 136th Running of the Kentucky Derby on NBC -  NBC Sports broadcasts exclusive coverage of the 136th Kentucky Derby on Saturday, May 1 starting at 4 p.m. ET. NBC Sports’ broadcast will bring the spectacle of the Kentucky Derby, which has been contested annually since 1875, home to viewers with behind-the-scenes access, celebrities and fashion surrounding the legendary Run for the Roses. The Red Carpet will feature celebrity interviews as the stars arrive to Churchill Downs to enjoy the greatest day in horse racing.  Bob Costas and Tom Hammond co-host the Derby alongside three-time Derby winner Gary Stevens.  KENTUCKY DERBY ON NBC: NBC Sports began its exclusive coverage of the Kentucky Derby, the longest continuously held sporting event in North America, in 2001. In May 2005, NBC Sports and Churchill Downs Incorporated reached an agreement giving the network the exclusive broadcast rights to the Kentucky Derby.  Meeting my future husband, Jack, changed my life for good. After the birth of our first daughter, Grace, and several years of city motherhood, we moved to Westchester County where I found friends and home, not to mention a place to park my stroller. Our house centered around my great kitchen window where I can look out and see the glorious seasons change against my garden and stone wall. The birth of my second daughter, Katie, prompted me to try it my own way as a lifestyle expert and author. Punch, It's Five O'Clock Somewhere, Fairy Parties and The Stylish Girl's Guide to Fabulous Cocktails were soon born along with my son, Jack -- making my family of five complete.   iVillage Inc., a wholly-owned subsidiary of NBC Universal, Inc., is the first and most established media company dedicated exclusively to connecting women at every stage of their lives. iVillage.com offers an authentic and robust community infused with compelling content from experts on health, parenting, pregnancy, beauty, style, fitness, relationships, food and entertainment. The site's interactive features include thousands of message boards and a wide variety of social networking tools, allowing women around the world to connect, share ideas, and seek advice and support about everything from fertility to fashion.

Television and film star Greg Grunberg learned that epilepsy can affect anyone at anytime when his son Jake was diagnosed with the condition at the age of seven. Since Jake’s diagnosis, Greg, star of the hit series “Heroes,” has become a personal hero to his son and many others by bringing epilepsy to light on the national stage.  Like most families, Greg and his wife knew nothing about epilepsy when Jake was first diagnosed. They turned to doctors, books and the internet to learn as much as they could about the condition. Through their searches, they discovered EpilepsyAdvocate.com , a community of people whose lives are directly impacted by epilepsy, including those with epilepsy, their caregivers, friends and family. These remarkable individuals share their epilepsy challenges and triumphs so that others are empowered to seek the best care to attain the goal of epilepsy independence—seizure freedom and minimal side effects.   Greg became Jake’s advocate by seeking medical care from and collaborating with someone who specializes in epilepsy. Today, through his involvement with the Epilepsy Advocate program, Greg has worked tirelessly to educate and empower not only people living with epilepsy, but also their friends and families.

She will be promoting the recent twists in this weeks episode that airs tonight, as well as promoting the LOVE GAMES: BAD GIRLS NEED LOVE TOO season finale on Tuesday, May 4 10PM, ET/PT on OXYGEN.  Amber, 27 – Scottsdale, AZ -  Season three “Bad Girls Club” star Amber lived life in the house focused on fun and boy chasing. Her no holds barred approach to life and bubbly energy brings out the party atmosphere no matter where she goes. Amber keeps her dating life spicy with variety – the nice guys bore this spotlight-loving bad girl quickly so she keeps the bad boys close by. This time around, she is searching for the perfect guy to call her own.  A spin-off of the record breaking series “Bad Girls Club,” “Love Games: Bad Girls Need Love Too” features three former Bad Girls -- Amber (season three), Kendra (season four) and Sarah (season three) vying for the man of their dreams from a pool of 13 eligible bachelors. Each week the ladies have the group of bachelors competing for their attention in a series of off-the-wall challenges and entertaining group dates. Amber, Kendra and Sarah must try to put their bad aside in an attempt to work together to narrow the field and identify the guy that’s most ideal for them. The men that don’t catch their eye and win their heart are eliminated weekly. Comedian Bret Ernst (“Wild West Comedy Show”) hosts the eight one-hour episode series. 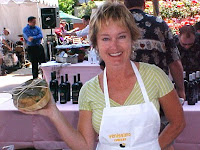 The Kentucky Derby is considered “The Most Exciting Two Minutes in Sports”, and is always run the first Saturday in May at Churchill Downs in Louisville. This year the Kentucky derby is on May 1st, so don’t miss out on the opportunity to party Kentucky style with a Derby inspired bash. Expert chef Gina Freize, can show you how to prepare reinvented derby dishes and how to mix up some festive Kentucky cocktails perfect for the occasion.  Chef Gina Freize is the owner of Venissimo Cheese with locations in San Diego, Long Beach,  Mission Hills and Del Mar, CA. With her flair for creating unusual cheese pairings, Gina has quickly become known as The Cheese Wiz in her culinary circle .

Tips on the best & worst this weekend at the Box Office. Steve reviews and comments on all the latest from Hollywood and gets the story behind the film.A veteran of the industry, "The Movie Guy" says exactly how he feels about the movies that you will be watching this weekend. Mike Horn comments on the lineup of big screen offerings but does not always agree with what Steve has to say. This is the movie review program to listen to every week and get the "real deal".
Email ThisBlogThis!Share to TwitterShare to FacebookShare to Pinterest
Newer Post Older Post Home