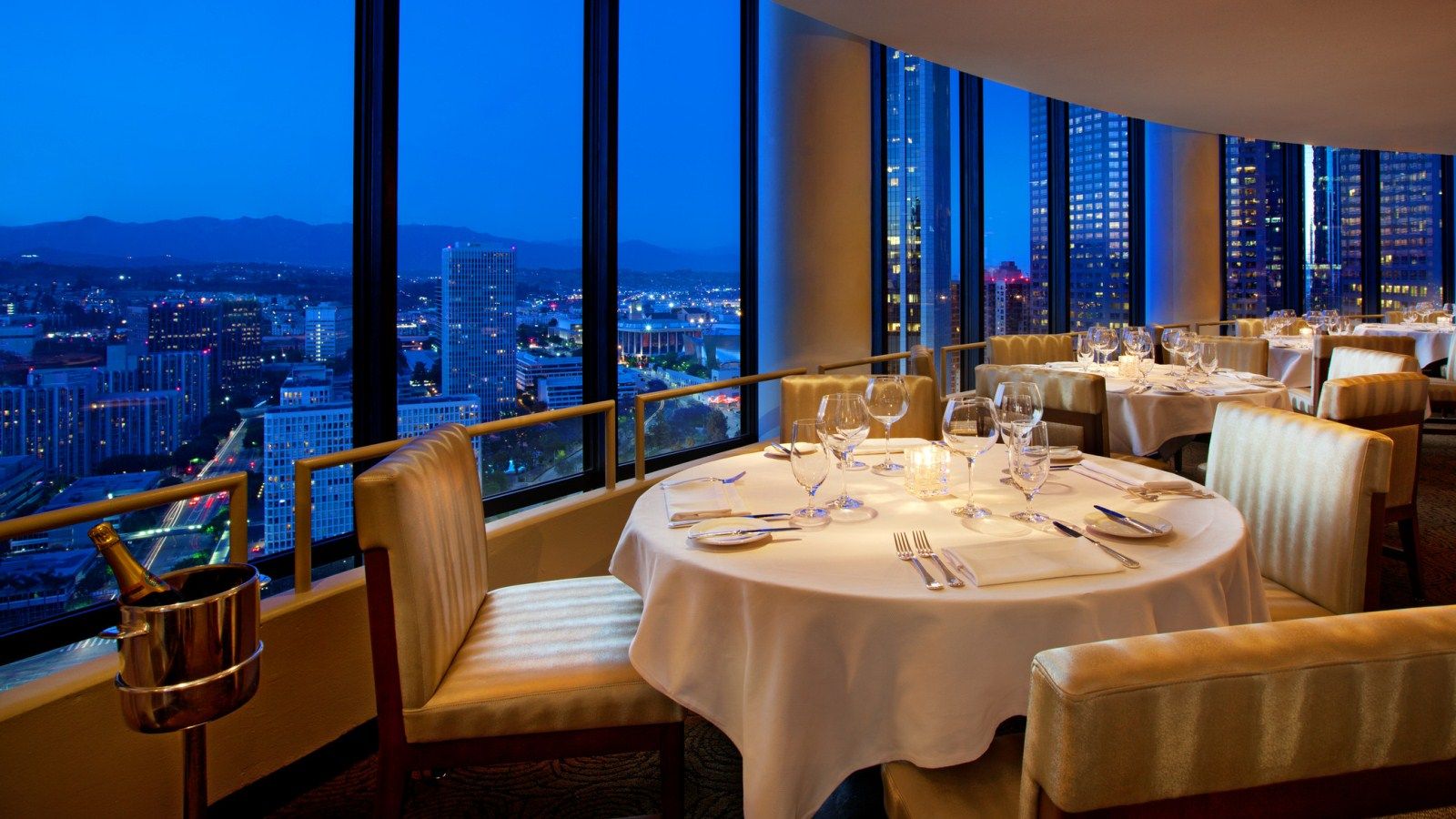 The Most Famous Downtown Los Angeles Hotel - Elegantly presiding over the City of Angels, The Westin Bonaventure Hotel & Suites provides the ultimate urban oasis in the heart of the business district. An international symbol that has come to represent the beauty and sophistication of the city itself, this famous Westin Los Angeles hotel is one of the most photographed destinations in the world. Stroll through our atrium lobby, and you'll immediately see why. Enjoy spectacular skyline views, access to over 40 specialty boutiques and restaurants, and unparalleled meeting facilities. Discover LA's largest convention hotel - widely regarded as a "City-within-a City" - sure to surpass all expectations. A landmark attraction in its own right, this unique name in downtown Los Angeles hotels beckons you with an exceptional setting.

LA PRIME - Savor The Views & Cuisine At Our Downtown Los Angeles Steak Restaurant
Located on the 35th floor of the Westin Bonaventure Hotel and Suites our award winning restaurant invites you to experience a culinary adventure in a relaxed atmosphere of refined service. LA Prime, known for its innovative and edgy cuisine offers prime beef steaks, both wet and dry aged, beautiful lamb and veal chops, fresh fish and shellfish enhanced with local produce and an award winning wine cellar, provides the ultimate in dining. Executive Chef Andreas Nieto has created a masterful menu utilizing only fresh ingredients in combination with an artist eye to please your palate. As you dine a million lights will stretch out at your feet or wink at you from the sky as you sit back, relax and enjoy all that downtown Los Angeles has to offer.

THE STEVE WILKOS SHOW IS IN ITS 9TH SEASON AND GEARING UP TO CELEBRATE 10 YEARS ON THE AIR LATER THIS YEAR!

Catch Up with the Former Marine and Police Officer Turned Talk Show Host as He Continues to Focus on the Importance of Social Issues.

More than 22 years ago, Steve Wilkos began moonlighting as a security guard on The Jerry Springer Show. Viewers began to identify with his tough guy demeanor and no-nonsense approach, and Steve began hosting his own daytime talk show in 2007.

Now in its 9th season, The Steve Wilkos Show is hotter than ever. The show has experienced larger year-after-year growth than any other syndicated talk show and has been renewed through 2018. Considered a man of the people, Steve's sincerity and straight-talking style continue to attract new fans, both men and women alike. The show has earned three Prism Award nominations for raising awareness about social issues such as substance abuse and domestic violence.

Steve is a huge sports fan (his hometown Chicago teams) and avid golfer and can often be found riding his Harley Davidson motorcycle in Connecticut, where he lives with wife Rachelle (executive producer of The Steve Wilkos Show) and two kids. Talk to Steve about his unique progression from military man and police officer to talk show host, and the hot topics his show is tackling this season.

MORE ABOUT STEVE:
Steve Wilkos is the host of “The Steve Wilkos Show,” a nationally syndicated series produced by NBCUniversal Domestic Television Distribution.  The show is now in its ninth season.  Since its debut, Wilkos’ popularity has skyrocketed—the show has grown 56% in households over its premiere season.  His straightforward approach combined with his sincerity and humor has earned viewers’ trust and respect.

Before beginning a career in entertainment, Wilkos served in the U.S. Marine Corps for seven years.  When he returned from service, he went back to his hometown of Chicago and joined the Chicago Police Department, following in his father’s footsteps.  During that time, he took great pride in keeping the streets of the notoriously volatile Shakespeare District safe for almost 12 years.  Wilkos retired from the police force in 2001.

His no-nonsense style, informed by his law enforcement background, was different from Springer’s and allowed Wilkos to create his own identity as a tough-talking host.  His popularity grew with viewers and as a result, in 2007, he began hosting his own show.

For the 2013-14 season, “The Steve Wilkos Show” is averaging over 1.9 million daily viewers with nearly 50% of his audience deriving from the advertiser friendly Adults 25-54 demographic.  The show has grown steadily for most of its seven seasons, with this current season delivering a +48% increase in viewership vs. its premiere season back in 2007-08.  It also continues to deliver strong results for local stations and is #1 in its time period among Women 18-49 and Adults 18-49 demographics in New York at 12:00 p.m. on WPIX, and in Los Angeles at 2:00 p.m. on KTLA, during the November 2013 sweeps period.

Wilkos’ show has earned him three Prism Award nominations for raising awareness about substance abuse and other social issues.  He served as the host of the Daytime Entertainment Creative Arts Emmy® Awards in 2011 and appeared briefly in a cameo role on a Halloween episode of “The Simpsons,” a milestone he calls “the highlight of my career.”  Wilkos also appeared in several TV shows and films, most notably the hit motion picture “Austin Powers: The Spy Who Shagged Me.”

A huge sports fan and avid golfer, he attends as many professional sporting events as his schedule allows, especially baseball, basketball and football games.  In his downtime, he can also be found riding his Harley-Davidson motorcycle.

Wilkos and his wife Rachelle, who is the executive producer of “The Steve Wilkos Show” and “The Jerry Springer Show,” have two children and live in Connecticut.