She might be a 13-year veteran of the Martha Stewart test kitchens, but as a working mom with two hungry kids, Sarah Carey faces the same challenges as every busy home cook when it comes to making dinner for her family. Whether developing recipes for stories in the magazine, appearing on MSLO’s radio and TV programs, or being featured within wide-ranging media outlets, Sarah shares her innate cooking passion, deep-seeded food knowledge, expert techniques, and helpful tips with an audience of millions. Her experience includes co-authoring the best-selling book Martha Stewart’s Cooking School, contributing to numerous additional MSLO cookbooks, and co-hosting the PBS cooking series Everyday Food. Starting in June 2012, she launched Everyday Food with Sarah Carey - a daily digital video series providing simple instructional demonstrations of delicious weeknight dinners. Growing up on a commune in Woodstock, N.Y., Sarah was exposed to a variety of diverse foods and cuisine types at an early age. She went on to receive formal training at the Culinary Institute of America in Hyde Park, N.Y., as well as a bachelor of fine arts in photography from the School of Visual Arts in New York City. Before joining MSLO in 1999, Sarah worked as a recipe developer for cookbook writer Barbara Kafka and former New York Times food columnist Molly O'Neil.

Everyday Food magazine is the indispensable handbook for home cooks, providing practical food solutions for every day of the year. Leading the team is seasoned Editor-in-Chief Sarah Carey who is regularly called upon by national and local media to share the magazine’s creative content and relatable advice. Since the magazine’s launch in October 2003, the Everyday Food brand has grown to include best-selling books, a popular PBS television series, a robust and interactive website and blog, regular segments on The Martha Stewart Show and Martha Stewart Living Radio on Sirius XM110, the popular Martha’s Everyday Food App for iPhone and iPod touch.

Over 25 years in the hospitality industry . She has held titles of Chef de Partie, Executive Sous Chef, and Executive Chef, at Chavez at The Royal and The Tea Room in Hyde Park Village. She worked for Helen Chavez (former City counsel woman in Tampa)8 years; Passports - Tampa's first Tapas Restaurant; Executive Chef at Ybor City s Cafe Creole. Darlene just won first place May 26.2012 for Best Non Tradional Cuban Sandwich in Tampa. Darlene was born and raised in Tampa and started cooking at the age of 6 at her grandmothers restaurant in Ybor City called "The Paramount". YouTube's brand new food channel HUNGRY, created by multimedia studio Electus. The channel, helmed by Food Network and Cooking Channel veteran Bruce Seidel, aims to form a more direct community with viewers than television can, and have more flexibility with format and content. Seidel believes that the programs on HUNGRY have strong enough production value to rival food programs on mainstream television -- though the programs are much shorter for the online audience. Expect a lot in the one to three minute range.

In the heart of hipster Brooklyn are Josh and Mike Greenfield, two charming brothers, musicians and underground caterers who face a culinary challenge in every episode. See the brothers explore food and battle their sibling rivalry while cooking for local cult bands, foodie celebrities and parties of all shapes and sizes, all from their loft home kitchen. New episodes every Monday. 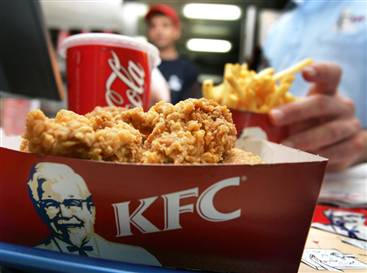 In what the brand is calling its biggest product launch since Kentucky Grilled Chicken®, KFC today introduced Original Recipe® Bites. The new menu item is bite-sized chicken at its very best and as only the world's most popular chicken restaurant chain can offer.

Original Recipe Bites are available in both six- and 10-piece portions, and can be ordered either a la carte or in a Combo. Combos include a side item and a medium drink. For a limited time, the six-piece combo is only $3.99, at participating restaurants nationwide.
Email ThisBlogThis!Share to TwitterShare to FacebookShare to Pinterest
Newer Post Older Post Home