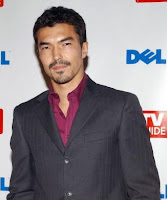 Ian Anthony Dale stars as Simon Lee, a government operative with mysterious ties to Sophia (Laura Innes) in NBC's new high-octane conspiracy thriller The Event.
The son of an Olympic hockey player, Dale once dreamed of a career in professional sports. After a debilitating injury in high school threatened that dream, he re-focused his energy from the baseball field to the stage. He graduated from high school with best actor honors and continued to perfect his craft at the University of Wisconsin, where he earned his Bachelor of Arts degree in film. Upon graduation, Dale headed to Los Angeles, where he worked for two years as a set builder, and soon after began pursuing acting roles.
Dale's television credits include a series regular role on "Surface," and recurring roles on "Day Break," "24," and "Criminal Minds." He has also appeared on "Trauma," "Cold Case," and all three shows in the "CSI" franchise. His feature film credits include "The Hangover," "Tekken," "The Bucket List," and "Mr. 3000."
When not acting, Dale enjoys golfing, hiking, and designing and building custom furniture. Dale currently resides in Los Angeles.


“So, how did you get in the wine business, Judge?”
That’s a question I’m often asked. Here’s the story: I first met Louis Lucas shortly after I moved from Solvang to  in 1975. We were both members of the Santa Maria Wine & Food Society and the Rotary Club of Santa Maria. Louis was growing wine grapes in the   and selling them primarily to wineries in  and , where wines made

from his grapes won high honors.  Louis and I became friends, especially enjoying the Wine and Food Society events together. In 1989, as a Superior Court Judge, I performed the ceremony when Louis and Jill were married.
In the mid-90’s the quality of Santa Barbara County wines, and the relative value of vineyard land compared to Napa and Sonoma, brought the major California wineries to the County in a land rush.  It was then that I first told Louis “Don’t sell any vineyards to those alligators from up north without first talking to me”.
In January of 1996, out of the blue, Louis called and invited me to lunch at Chef Rick’s in Orcutt.  Over lunch he told me he was considering selling one or the other of his two vineyards.  I told Louis I wasn’t interested in buying a vineyard but I’d buy a half interest in the two vineyards if he would do the farming.  By the end of that lunch, Lucas and Lewellen Vineyards was in business! The

two vineyards were the Lucas Brothers’ Los Alamos Vineyard, a fully planted and productive 88 acres, and the Goodchild Vineyard, 100 acres that had 20 acres of exceptional Chardonnay, plus plantings of kiwis, blueberries, apricots and plums.  We soon started planting Pinot Noir and more Chardonnay in the prime Goodchild Vineyard, a project that continues to this day as Pinot Noir replaces kiwis and the old orchard.
In 1997, after a long negotiation, we bought Valley View Vineyard near Solvang.  The Lucases moved into the home on that site overlooking the vineyard, and Louis went to work improving the pruning and trellising, increasing the vine density, and planting every available corner to more vines. By 1998, we bought our neighbor’s vineyard in , already planted to 19 different varieties, and again Louis went to work improving the vineyard and planting the last available acreage.
Growing and selling premium wine grapes was a challenging business, but the lure was irresistible to see how well we could make our own wine from grapes we knew were world class. After first making wine in other people’s wineries starting in 1998, we saw the need to gain complete control of the process with our own state-of-the-art facility.  Dan Gehrs came aboard as a consulting winemaker and we built the winery in Buellton.  The tasting rooms in Solvang soon followed. In 2006 we hired Megan McGrath to be our winemaker.
From the beginning, we set our sights on doing nothing that we couldn't be proud of.  Today, I am pleased to say that I am proud of Lucas & Lewellen Vineyards, from the grapes, to the wines, to the staff of exceptional people who make it all happen.  But, as we like to say: "You ain't seen nothin' yet!  The best is still to come.