Once a part of a secret community of world-class geniuses doing cutting-edge research, Matt (Brady Smith) and Claire (Kellie Martin, ER), with the aid of their teenage son, Brody (Justin Kelly), must stop their former colleague Edwin Jensen (David Andrews) who has now gone bad.
In this roller coaster adventure Matt, Claire and Brody race against the clock following clues, thwarting evil schemes and rediscovering each other in the process. Ultimately, they not only fight to stop the rogue geniuses, but also rediscover their family bond. Also starring Patricia Richardson (Home Improvement), David Andrews, LeVar Burton (Star Trek: The Next Generation), and Alyssa Diaz (As the World Turns).
Shawn Johnson-Olympic Gold Medalist

Shawn began her life with a bit of drama. Shawn was born with an apgar score of "0". Not an ideal way to start, but it did not slow her down. Shawn was up to "par" within 24 hours and hasn't slowed down since. Shawn was a very happy baby, and approached every day with a smile on her face. Ever eager to explore and get into something she shouldn't, Shawn kept her parents on the edge of their seats every waking moment.
Shawn had a passion from a very early age to climb, she could always be found on the jungle gym at daycare or shimmying up the sides of swing sets to reach the top. With an obvious interest in anything physical, from "riding" the vacuum cleaner to wrestling with her cousins, Mom and Dad were challenged early on to find activities that would satisfy Shawn.
After attempts at dance class and group tumbling classes, Shawn found happiness in gymnastics. With padded floors and plenty of things for Shawn to safely climb on during gymnastics class, life was very good at the Johnson house. Mom and Dad were thrilled to turn her loose. From tot to teen Shawn was eager to try most anything. A daredevil at heart, she would always gravitate to activities that were physically challenging.
As a result of her eagerness, Shawn progressed quickly in gymnastics and ultimately the sport became her life. Shawn became a student of Chow and Li of Chow's Gymnastics and Dance in West Des Moines, Iowa when she was 6 years old. She began competing at the age of 7. Year after year she continued to have a love for the sport and advanced to the point when it became obvious where her talents might take her.
Though the Olympics were never a conscious goal, once Shawn reached the elite level with success, the next step was the US National Team and their goal is to build the best team for the Olympics. Shawn qualified to the US National Team and through success in competitions, she became one of the top prospects for the 2008 Womens Olympic Team. Shawn placed first at Olympic Trials and secured a spot for the 2008 Olympic Team. From doing what she loved and being allowed to have fun while doing it, Shawn and her coaches had reached a level of success the Johnson family had never anticipated.
Sean Lennon & Adam Lippin-Atomic Wings 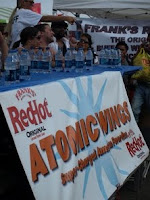 A highlight of the returning Siren Music Festival, held annually at Coney Island, will be the "Atomic Wings" Buffalo Wing Eating Contest sponsored by Atomic Wings and Frank’s® RedHot®, the #1 Hot Sauce Brand in America.* Sean Lennon, last year’s winner, will return to defend his crown as the official "Atomic Wings" Wing King of New York. Join 100,000 fans on Saturday, July 17th to cheer on the competitors as they vie for the title and the official Buffalo Wing Crown.
The "Atomic Wings" Buffalo Wing Eating Contest celebrates the popularity of this "pub grub" that has gone from tavern favorite to menu mainstay all across America. As one of the regions fastest growing franchises, Atomic Wings has once again teamed up with Frank’s® RedHot®, the original sauce used to create the first-ever Buffalo wings in 1964. Frank’s RedHot is also the secret behind consumers’ obsession with Atomic Wings and their distinctive flavor profile.
Email ThisBlogThis!Share to TwitterShare to FacebookShare to Pinterest
Newer Post Older Post Home